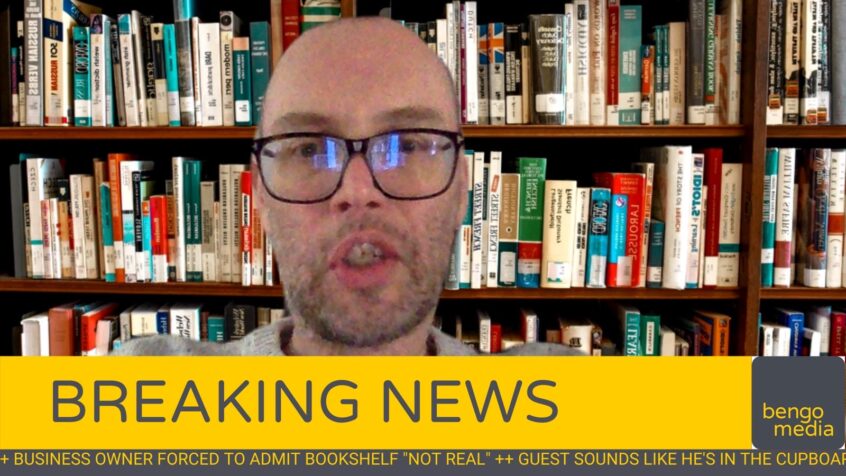 This is the second of a three part blog series called Podcasting From Home – The New Normal. This section – on getting your contributors to sound great – follows on from part one, which is all about getting you sounding great.

Being a new dad for the first time, much of the last few months have involved watching news and sports channels to pass the time, as my daughter snoozes on my shoulder. Tough life, I know.

Video calls, using the likes of Zoom and FaceTime, are now prevalent on these channels post-pandemic. Even newsreaders were using them if they were self-isolating. And you have to take your hat off to the tolerance levels of TV news directors as we Brits struggle to learn how to use the tech.

We’ve witnessed guests in almost pitch darkness, people staring at their laptop camera down the barrel of their noses (nice!), people too close, people too far away. That’s before we mention the vanity bookcases, and Matt Hancock’s eye-catching portrait of The Queen!

But there’s also been a real tolerance towards bad sound quality too. I watched Lib Dem Interim Leader, Ed Davey, on the BBC News Channel only this week sounding echoey and distorted in his kitchen.

Ed, like many others, seemed to be talking into the native mic on his laptop or desktop, without any sort of external mic attached. But to be honest, for a couple of minutes of airtime, that tinny sound isn’t going to upset anyone.

But it’s not the same for podcasts.

Imagine, your dream podcast guest sounding like that, and having to put up with it in your headphones for a full 45 minutes.

In the last blog, we talked about how to improve your sound when recording a podcast from home. But, unless you’re Piers Morgan, it’s likely that your guest is going to be doing more of the talking than you. Therefore, you need to try and manipulate their sound quality as best as you possibly can from afar.

Here are a few things you can do to best audio possible from your guests when recording from home.

Whilst these tips should help, rule number seven is perhaps the most important of all…

7. Don’t let your guests get too flustered about the tech. All good if they are experienced podcasters themselves, but in a lot of cases, it’ll be the first time they will have recorded an interview ‘down the line’. Do everything you can to put them at ease and make sure the are more focused on what they say than how they sound.